Home » USA » In the Path of Abraham: selective memoir of Trump’s Israel policy | US News 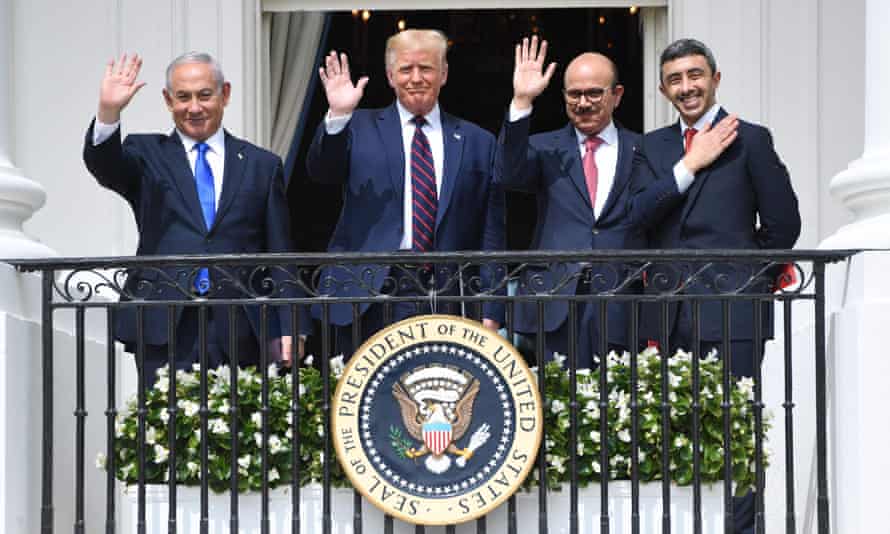 Jason Greenblatt was once in-house counsel to the Trump Organization. After the 2016 election, he became Donald Trump’s special representative for international negotiations. With Jared Kushner, he aimed to secure peace between Israel and the Palestinians.

Just like its predecessors, the Trump administration failed at that task.

That cold reality might make some think the subtitle of Greenblatt’s new memoir – How Donald Trump Made Peace in the Middle East and How to Stop Joe Biden from Unmaking It – is at least a bit of an overstatement.

On the other hand, Trump did deliver the Abraham Accords, which normalized relations between Israel and the UAE, Bahrain, Sudan and Morocco. The Trump administration also moved the US embassy to Jerusalem and shredded the Iran nuclear deal. The 45th president left his mark in so many places, in so many ways.

As to be expected, Greenblatt’s book is silent about some of Trumpism’s darkest hours, its engagement with the antisemitic far right: Charlottesville, Nazis and tiki torch marches, the January 6 insurrection. Also predictably, he is happy to strafe Barack Obama, Alexandria Ocasio-Cortez, Ilhan Omar and Rashida Tlaib.

Greenblatt left the White House in late 2019. He volunteers that Kushner was “the best boss I ever had or will ever have – with the possible exception of his father-in-law”. These days, Greenblatt is engaged as an investor, like Kushner with an eye on the Middle East.

Greenblatt’s book is a gentler and more graceful version of Sledgehammer, a memoir written by David Friedman, Trump’s ambassador to Israel. Like Friedman, Greenblatt attacks Biden and blows kisses at Benjamin Netanyahu, Israel’s once and possibly future prime minister.

As was the case with Friedman, Greenblatt keeps mum about Trump saying of Netanyahu, “Fuck him,” as was reported by Barak Ravid in Trump’s Peace. Ravid captured Trump in all his profane and vindictive reality. He reported Trump’s critique of Netanyahu and his praise for Mahmoud Abbas, the ageing Palestinian leader.

Trump told Ravid he believed Netanyahu “did not want to make peace. Never did.” As for Abbas, Trump said: “We spent a lot of time together, talking about many things. And it was almost like a father. I mean, he was so nice, couldn’t have been nicer.”

Greenblatt skips both issues, choosing to stress Abbas’s hostility toward Israel and his recalcitrance in negotiations.

Greenblatt also says he stood removed from politics until Trump launched his candidacy, and first registered as a Republican in 2016. No one would confuse him with Michael Cohen, the Trump lawyer who entered a guilty plea and turned on his former boss.

Greenblatt does not crave the spotlight but he can be subtly subversive. In the Path of Abraham casts bouquets at three Trump nemeses: Mike Pence, HR McMaster and John Bolton, McMaster’s successor as national security adviser. Trump dumped McMaster in a tweet after clashing over the Iran deal, then sent Bolton packing for his bellicosity.

“Pence was, refreshingly, the authentic article,” Greenblatt writes, “… a man who was unflappable and unfailingly helpful, no matter the problem, big or small.”

Greenblatt offers no comment about Pence’s plight in the Capitol on January 6, when the mob chanted for him to hang, or Trump’s reported comment that his vice-president deserved it.

During his trip to Israel in 2017, Trump excluded McMaster from a meeting with Kushner, Netanyahu and the Israeli national security adviser. According to Israeli reports, Rex Tillerson, then secretary of state, was invited to join the group. But “McMaster sat outside the King David room during the course of the entire meeting”.

McMaster suffered in silence. Bolton did not. “I don’t think [Trump’s] fit for office. I don’t think he has the competence to carry out the job,” he told ABC, promoting a book of his own.

In the Path of Abraham is not that. But as Greenblatt conveys his impressions of the Arab world, he chooses to call the Saudi crown prince, Mohammed bin Salman, “a truly visionary leader”.

He writes: “I cannot possibly understand what then-candidate Biden was trying to accomplish when he said that he planned to make the ‘Saudis pay the price, and make them, in fact, the pariah that they are’.”

It had something to do with US intelligence believing the prince ordered the murder, dismemberment and disposal of Jamal Khashoggi, a Saudi dissident and US resident who wrote for the Washington Post.

Then again, with gas topping $5 a gallon, many Americans wish Biden would make nice with the Saudis and stay on script.

Greenblatt also offers glowing praise for a leader of the UAE, writing: “Sheikh Mohamed bin Zayed bin Sultan Al Nahyan, colloquially known by his initials as MBZ, is a unique leader. One of the most influential people in the Middle East, he also one of the most humble and thoughtful. Wise and extraordinarily open-minded, he knows the best way to plan for the future is to create it.”

In the same spirit of trans-global high-fiving, Greenblatt has attracted blurbs of praise from Trump, Kushner, Pence, McMaster, Pompeo and a passel of Gulf-state ambassadors. The book could double as a prospectus.

As the book lands, Greenblatt finds himself unexpectedly in the news. Last week, the New York Times reported that he made the introduction of Alex Holder to Kushner. Holder is the British documentary film-maker subpoenaed by the House committee investigating the Capitol riot.

Fittingly, In the Path of Abraham contains a Yiddish proverb: “Mann Tracht, un Gott Lacht”. Translated: “Man plans and God laughs.” Greenblatt would be hard-pressed to find anyone close to Trump smiling at this moment – whatever their plans may be.