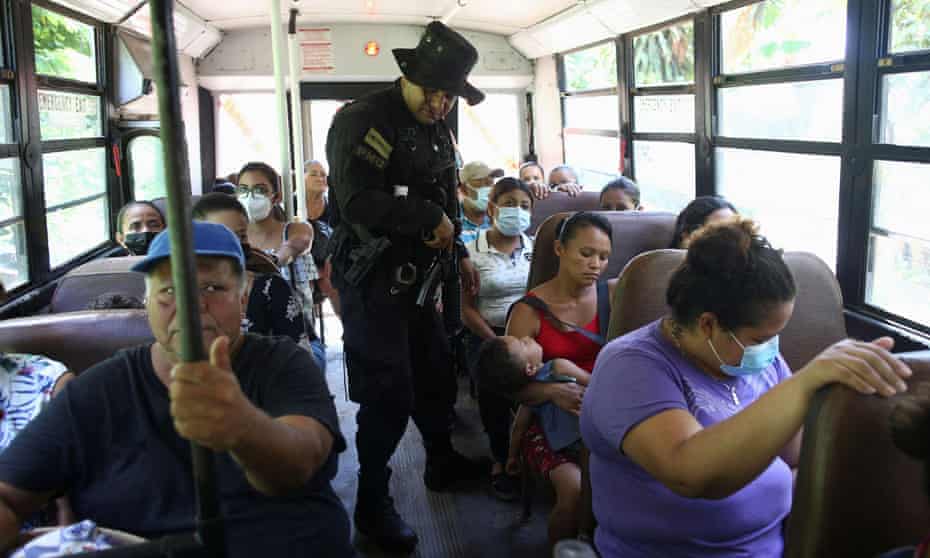 For Nelson Moz, an affable gangland preacher from El Salvador’s violence-scarred capital, it should have been a day to rejoice.

“It’s an honour to be the pastor here – it’s a privilege!” the church leader told worshipers as they filled the Ebenezer Baptist church one Sunday morning last month to celebrate the denomination’s 35th birthday.

But Moz’s mood was somber, despite the white streamers and balloons with which his temple was festooned and the jubilant slogan behind his rust-eaten lectern proclaiming “Jesus the King”.

The pastor’s congregation was smaller than usual, too, after security forces had raided the church a few days earlier to capture the tattooed ex-gangsters to whom it had offered sanctuary and hope.

“They took all of them,” sighed the 60-year-old evangelist, who has spent over a decade fighting to save the lives and souls of some of El Salvador’s most violent men in a notorious gang stronghold called Colonia Dina.

Moz voiced bewilderment that police had targeted his church’s rehab centre as part of a huge crackdown that El Salvador’s president, Nayib Bukele, ordered in late March after an explosion of bloodshed observers suspect was the result of the collapse of a secret pact between the government and the gangs.

“Our project wasn’t underground or anything,” said the pastor as he stood outside a small bakery next to his church where God-embracing ex-convicts were taught to make bread, not gang war.

“The condition for being allowed to stay at a place like ours is that first … you’ve served your time,” Moz explained. “We don’t accept anyone who’s still actively involved in the gangs … The requirement for being here is having … given up violence.”

Yet that was not enough to save Moz’s flock from a clampdown that has seen more than 43,000 Salvadorans dragged into custody in the last three months – a stunning security blitz with few parallels in Latin America’s recent history.

“I don’t know where they’re putting so many people,” said Óscar Picardo, a prominent academic and political pundit.

Bukele’s “state of exception” – declared at the end of March and recently extended until late July – has outraged human rights activists who say massive human rights violations are being committed.

“They have detained tens of thousands of people, many of them because of their physical appearance or because they have tattoos … We have found case after case in which the people [being arrested] have no links to gangs,” said Tamara Taraciuk, Human Rights Watch’s acting director in the Americas. “The reality is, this could happen to [anyone].”

Taraciuk said activists had documented cases of “short-term enforced disappearances” in which targets were spirited off to undisclosed locations by troops.

“That is something we used to see in the military dictatorships in South America … but it is not common today and it is really not common in a country where you have a president who was democratically elected,” Taraciuk said. “It shows the extreme to which they have gone.”

Exhausted with years of rampant gang violence, however, many Salvadorans see little extreme about Bukele’s crusade, which the president compares to chemotherapyandinsists will continue until “the metastatic cancer” of crime is eradicated.

Picardo remembered how one poll before Bukele’s landslide 2019 election showed voters “yearning for a truly iron-fisted government – a government with a certain level of authoritarianism to put an end to corruption and impunity”.

“Bukele fills this gap, this desire … for a sort of social disciplining, for the punishing of society. [The idea is:] ‘If you don’t behave yourself, I’ll do this’ – and that’s what he has done,” said Picardo, who estimates the president has the firm backing of about half of voters.

“It’s almost like a sect,” Picardo said of Bukele’s political movement, which many Salvadorans also credit with slashing the murder rate and offering generous handouts to the poor during the Covid pandemic.

“He doesn’t just say things with his mouth – he gets them done … He’s a man who is guided by the hand of God,” enthused Gilberto Orellana Mena, a 45-year-old preacher who attended a recent rally in San Salvador where pro-Bukele activists urged him to seek a second term in 2024.

“Nothing happens to those who are obeying the law,” Orellana said of his leader’s crackdown, batting away fears that innocent people were being ensnared in Bukele’s dragnet.

Outside the prisons into which thousands of mostly young, impoverished men are vanishing, their panicked relatives beg to differ.

More than 50 prisoners have reportedly died in mysterious circumstances after being arrested on the vague charge of “unlawful assembly”.

“Each day is agony,” said Marina Lemus de Arce, 50, weeping as she described how her son, Wilber Alexander, was seized on Easter Monday in the city of Metapán and carted off to the Mariona prison.

Since then, Lemus has slept under a seagrape tree outside its gates while she waits for news. “We’re all human beings. There’s no reason to treat us like this,” she sobbed, voicing disenchantment at Bukele’s actions.

“He promised so many things – and he hasn’t fulfilled them,” Lemus said.

Another woman grew angry as she described how her brother, a street hawker from the city of Santa Ana, had been seized.

“He’s a cabeza de polloa birdbrain … He doesn’t think,” she said of Bukele, before admitting she had intended to vote for him herself – and only hadn’t because her official ID card was stolen. “I’m a birdbrain too,” she admitted. “I thought he would be different.”

At Pastor Moz’s church, preachers are responding to the historic crackdown with a message of comfort and hope.

“We are hard-pressed on every side, but not crushed; perplexed, but not in despair; persecuted, but not abandoned; struck down, but not destroyed,” he reassured worshipers at the birthday celebration, quoting Corinthians.

With his reborn ex-convicts back in jail, Moz said he had opened a new front in his battle to help some of El Salvador’s most marginalized citizens. “My work has taken a new twist. Now we must care for the wives, the mothers and the grandmothers [of the prisoners],” he said. “Here we serve those who are most in need.”

As his single-story temple filled with a crescendo of guitar riffs and “Hallelujahs!”, Moz reflected on the turmoil unfolding outside.

“Like all human beings, there are times when we feel frustration, sorrow and puzzlement … But then comes a moment of reflection where you realize life brings hard times and problems too … and we learn from them, don’t we?”

“Our hearts may be uneasy,” the pastor concluded, “but we are trying to find the strength to go on.”