Home » CoronaVirus » Dying of Covid, my 93-year-old artist father was given hours to live. Surely he couldn’t paint himself out of this one? | Nigel Featherstone | Corona News 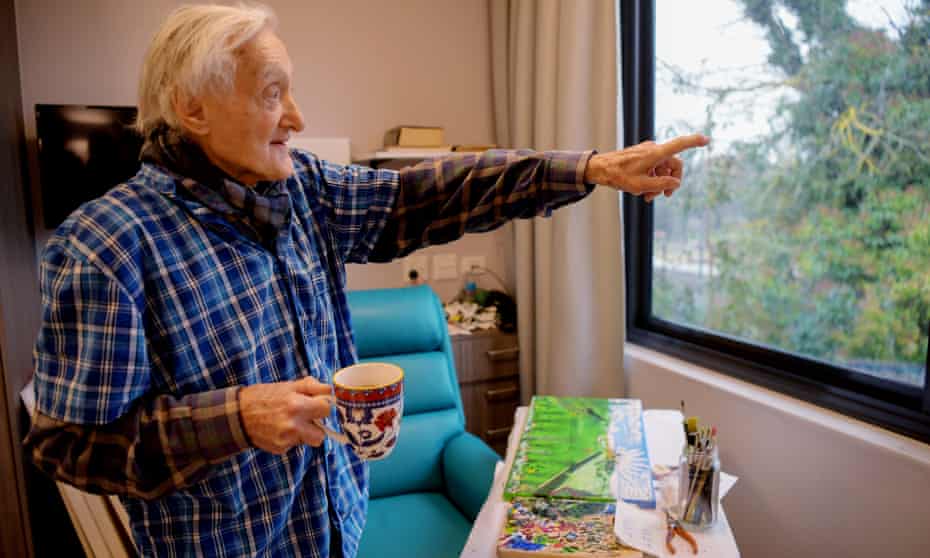 On Tuesday 26 April I received a phone call I will never forget. “We have X-rayed your father’s lungs,” said the ICU doctor at Canberra hospital’s Covid ward. “I’m afraid the news is not good. He has 48 to 72 hours to live.”

A week earlier, my father, Jack Featherstone, who lived alone in a former schoolhouse in Braidwood, a small town in rural New South Wales halfway between Canberra and Batemans Bay, had been admitted to hospital. Within hours he’d tested positive for Covid-19. He had just celebrated his 93rd birthday.

Two years prior, Jack had received a cancer diagnosis, for which he chose a palliative approach. Six months later, he spent a fortnight in Goulburn Base hospital having what appeared to be heart attacks.

Now he had this new health challenge – one that millions of people around the world had faced, too many not surviving.

Australia this weekend reached the milestone of 10,000 Covid deaths. The pandemic continues to be a matter of life and death, especially for the elderly.

Regardless of his various diagnoses, Jack was active in Braidwood’s vibrant social life and enjoyed the support of the community. Walking up the main street with him took hours, because everyone wanted to stop and ask how he was faring.

In the days before the ICU doctor’s phone call, I visited my father three times.

During the first, I was made aware of my own risk of exposure to Covid when I donned the required personal protective equipment (PPE), including booties, gloves and a face shield. As I entered my father’s room, I thought it may have been the last time I saw him. Behind a tent of clear plastic, his skin was the colour of milk. Hollows showed where his cheeks used to be.

“But look at that view of the Brindabellas,” he said, referring to the mountain range that borders the city’s west. “Isn’t it a ripper.” An outsider artist who has held just three exhibitions in his long life, my father’s deep love of painting – indeed his daily pursuit of the sublime through art – is clearly what keeps him going.

Days later, Jack was transferred to the Covid ward. Even though I asked for directions, I became lost. Apart from the red-print signs saying DO NOT ENTER, there were no indications of what lay behind the glass wall.

Again, I covered myself with PPE, before a nurse led me to my father’s room. Sitting in a chair but connected to an oxygen tank, Jack was struggling to breathe; it sounded as if he was trying to draw life from the ocean.

Looking at the floor, he said, “They told me not to get vaccinated because of my cancer.” Then he looked up. His wet eyes seemed to say, “Of all the things to knock me off.”

Word quickly spread through the family. His eldest sister, Edith, who at 99 still lives at home in Sydney, rang me with panic in her voice. “Please tell my brother how much I’ve loved all the adventures we’ve had.”

I drove back to Canberra, donned PPE again, then put my hand to my father’s bone-thin shoulder.

He looked me in the eye and said, “I want to die in Braidwood.”

Only two and a half years ago, I’d arranged my mother’s final farewell, but I was not ready to do it again. Despite the gravity of the most recent prognosis, and needing a 24-hour reprieve from family talk about disease and dying, I caught the train to Sydney to fulfil work commitments.

And immediately regretted it.

I cancelled my meetings and spent the afternoon at the Australian Museum, because my father had always been interested in palaeontology. As I stared at the skeleton of a dinosaur, a small boy beside me, who appeared to have become separated from his parents, called out, “Daddy? Daddy? Where are you?”

Two days later, my father remained alive, as he did the week after that.

Once his viral load was sufficiently reduced, Canberra hospital discharged Jack and sent him back to Braidwood hospital, where he spent two months recuperating. He began walking again – this from a man who until a year ago had trekked weekly up Mount Gillamatong, the landmark on the edge of town.

Even though he had spent the best part of three decades living and making art in the old schoolhouse, Jack made the decision to move into the permanent-care building adjacent the hospital. Two years ago, the NSW government had demolished the original Braidwood hospital, constructing a “multipurpose service”, which opened in 2021.

Central to the design and management of the new facility is the principle of ageing in place – ensuring that, no matter how precarious their health, the town’s old folk can still hear and feel all that has become essential to them, can look at the sky and know where they are, can be visited by people who know their stories. For Jack, locals drop off paints and canvases.

Recently, I visited him again.

North-facing, his room was filled with morning light. Jack had finished a new painting, which was dominated by a tree he had rendered in bright-yellow autumn splendour, around it 30 figures representing those who have helped him this year.

Set out on a narrow table was another painting, a work in progress, this one depicting the lush, green paddocks beyond the room’s window.

I asked if there was anything he wanted from his house.

“Yes,” he said with a smile. “My sunglasses. The winter light around here is brilliant – it’s so good for your health. I want to bask in it for as long as I can.”