Chef Crystal Wahpepah on the power of Indigenous cuisine: ‘Native foods are overlooked’ | US News 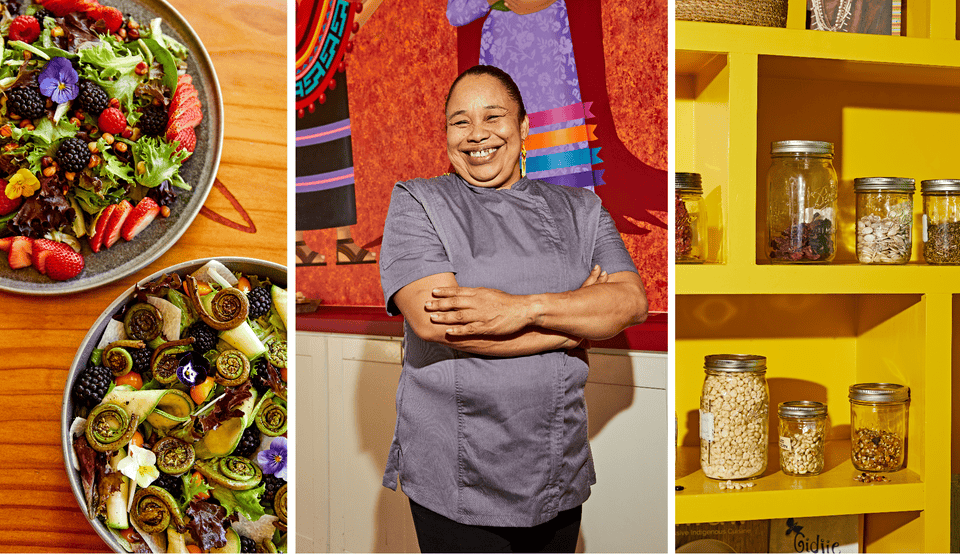 Out on the sunny patio at Wahpepah’s Kitchen, sizzling plates of bison and deer make their way down a table filled with Native American educators from across the country. The game meat joins other indigenous dishes on the kitchen’s menu, such as leafy salads topped with striped red corn and blue corn mush sweetened with berries and maple.

Chef Crystal Wahpepah, the owner of Wahpepah’s Kitchen and a member of the Kickapoo tribe, is proud to see the gathering. Food is medicine in the Native American tradition, and her Oakland restaurant is all about bringing together Indigenous producers and ingredients – sustainable meats, fresh berries, heirloom corn and herbs – to help people heal.

“Being a Native American chef is more than being a chef. It’s deeper than that,” says Wahpepah. “It’s about how you connect to the community and health. It’s about how we impact people and what we put in our foods.”

In the seven months since she opened Wahpepah’s Kitchen, one of only a handful of Indigenous restaurants in the nation, Wahpepah has become the toast of the culinary world. She’s speaking at national conferences, preparing for a Food Sovereignty Symposium and Festival in Michigan, and is a finalist for the 2022 Emerging Chef award from the James Beard Foundation.

But for all the buzz, Wahpepah’s overnight success has been a lifetime in the making. Wahpepah, 50, grew up in Oakland’s close-knit Native American community. She’s registered with the Kickapoo tribe of Oklahoma, like her mother and grandfather. When her parents split, her father, who was Black, went back to Louisiana.

She says it was hard being the only mixed-race kid in the family, the only one without a father in her life. But food traditions anchored her to her family and Native American heritage. “I ended up embracing it,” she says.

Today, Wahpepah’s Kitchen is a bustling hub filled with bright colors and artwork that tells the story of the food they serve. A mural by the artist Votan Henriquezan depicts Indigenous food warriors from across the Americas, while columns painted by Diné artist Tony Abeyta are adorned with golden corn – Navajo symbols of fertility and sustenance – set against turquoise and cobalt blue clouds.

Working alongside her three daughters, Rosario, Rikki and Kala Hopper, who are registered Big Valley Pomo, her sous chef Josh Hoyt (Ojibwe) and Ecuadorian head chef Diego Cruz, Wahpepah’s mission is to introduce people to real Indigenous cuisine while making sure her family traditions endure. Take the elderberries and blackberries she loves to cook with, for instance.

“I find berries the most beautiful thing. It’s memories of me growing up and picking blackberries with my grandfather,” she says. “Those are the best times and actually one of the healing times for me. I believe life is a circle in how it all comes back; and if it did it for me it can do it for somebody else.”

The Guardian sat down with Wahpepah to discuss how her upbringing and heritage shaped her cuisine, her passion for food sovereignty, and healing her community through food. The following interview has been edited for length and clarity.

Crystal Wahpepah: ‘Everyone can make a difference in our food system’

Your food feels like what you’d be eating if you had a garden and were able to forage for seasonal food. How would you describe your cooking philosophy and approach to recipes?

That’s exactly what we like to represent when you eat [our food]. If we look at how the universe works, we’re supposed to eat in a natural way according to the season. I also believe that our food shouldn’t travel that far. When you taste our food, you taste the cleanness and that it doesn’t travel. That’s my philosophy and I’m pretty sure I’m right.

Some of our recipes, like the Kickapoo chili, are things that my tribe always makes. I also gather recipes from going to the library and reading Native American stories, and getting recipes from them.

It’s been overlooked how beautiful Native foods are and where they come from. Our background comes from a lot of protein, so I specialise in game meat, such as venison and rabbit. My grandfather was a hunter, so when my brother hunts, he knows to bring it to me and I know how to cut it.

How would you describe your mission as a chef, and what do you enjoy most about your job?

Our food system is really pretty bad. It affects who we are, our energy, how you think. It has a lot to do with depression. My mission is to have awareness of our food, and at the same time make it visible to our community, using Indigenous knowledge and expertise to transform the food system. And also to cultivate and sustain connections to Indigenous farmers.

The most beautiful thing about being a Native American chef is the community and who you get to work with … In my early days as a caterer, sometimes I only got one catering job a month. I went to a lot of food sovereignty summits and catered for a lot of Native American organisations. Those are the people that made Wahpepah’s Kitchen.

I wouldn’t do what I do without my community, here in Oakland but also all over the nation. And being supportive and actually being with Native-led people, and making a difference in every child and every elders’ life. Everyone can make a difference in our food system.

You use ingredients like amaranth, purple corn and Oklahoma red hominy. Where do you find them?

I’ve been very fortunate to work with Native American food producers. We have smoked cedar salt done for us by Sakari Farms in Oregon. The maple sugar comes from Michigan. Blue corn is from the Ute Nation in Colorado. The chocolate is from Belize. Wild peppermint from South Dakota, smoked salmon from the Lummi Nation in Seattle. A member of the Mono Nation in Fresno mills acorn flour and delivers it every two weeks. When somebody comes to see me from another state, they bring corn or wild rice. Deep Medicine Circle [a non-profit farm and Indigenous food collective] growing our greens.

Everything you see on the menu is from a Native American or Indigenous producer. Anyone who comes into my life and can offer some positivity … I know that will transfer to us and the people who eat our food.

How have you designed your menu for healing?

We come from a gluten-free diet. When people ask what is gluten free [on the menu], I say everything, with the exception of the blue corn bread. If you want to indulge, indulge right, and the blue corn has a lot of good iron. And I like to offer a lot of teas, different berry teas and mint teas. You have wild mint, peppermint and yerba buena. Teas are healing, they’re comforting.

Who taught you to cook, and what are your earliest food memories?

My grandma Cecilia. My grandparents come from Oklahoma, and I used to go back and forth there from Oakland during the summer. I come from a family that cooks, and was always fascinated being in the kitchen with my grandmother and my aunt. I would always ask my grandmother, “Where did you learn this?”, and she was always telling me.

One of the first things I made was dried corn. My aunt had a farm, pigs and the whole shebang. I was seven, and we would get the corn during harvest, cut the corn, and put it on window screens. That’s how you would dry it in Oklahoma, because it’s so hot, and it would dry for three or four days, and then we would have it for soups. That was one of the first things I ever made and and one of the things I pretty much always copy from there.

Growing up in the midwest, we did a unit on local Native American nations, but it probably was not at all accurate. Do people have a lot of misconceptions about Native American foods?

We haven’t talked about fry bread – a lot of people think that’s what [all Native Americans] made. It’s not true. And I always knew that, just because of the different foods we had. [Fry bread] is more like powwow food. It was something that was given to Native Americans on the reservation when they first moved on to them, probably in the 1800s. To this day we eat it when I go back to Oklahoma, but I eat it as a celebration, not as an everyday meal.

There’s a lot of discussion today about food sovereignty with people of color, especially African Americans, but this was an issue first for Native Americans. What did being taken from your land and traditional ways of eating do to people’s health?

It was pretty much [devastating] healthwise. Can you imagine being removed from your homeland? I can only go from my own experience, but my family has been affected with diabetes and lost their limbs, heart disease, cancer and things like that.

Me and my sister were a year apart. And she died from cancer, leaving behind seven kids. It makes you think, if we just ate better, could we have done more to avoid this? It makes me want to work harder.

Russian troops pull back from Kharkiv after weeks of bombardment, Ukraine says

Russian troops pull back from Kharkiv after weeks of bombardment, Ukraine says