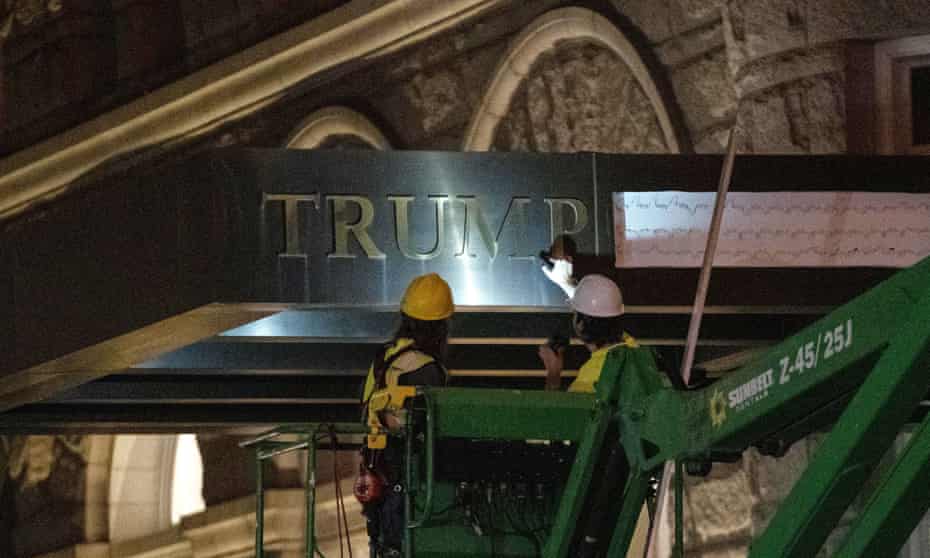 Workers took Donald Trump’s name off his hotel on Pennsylvania Avenue in Washington DC on Wednesday, after the completion of the $375m sale of the lease to investors from Florida.

House Democrats estimate the former president, under legal and financial pressure on multiple fronts, will reportedly gain $100m from the sale, once a loan for the renovations is paid off.

One ethics group called the hotel “a sinkhole of corruption”. During Trump’s four years in the White House, the hotel became a magnet for aides, supporters and foreign businesses seeking favour.

Critics and ethics groups were particularly concerned about the situation as Trump did not formally divest himself from the Trump Organization. The presidential historian Michael Beschloss predicted that even after the sale “political ghosts will linger”.

The hotel lost more than $70m in the four years of Trump’s presidency, including losses each year before pandemic shutdowns in 2020. Many hotel brokers, owners and consultants did not expect the 263-room hotel, located close to the White House, to fetch such a high price.

The price of the lease, equivalent to more than $1.4m a room, has also drawn scrutiny from Democrats in Congress. The New York Times reported that JLL, a real estate firm, put the average sales price for hotels in Washington in 2020 at $354,000 per room.

CGI Merchant Group, the buyer, reportedly plans to turn the hotel into a branch of the Waldorf Astoria hotel chain. Earlier this month, the House oversight committee requested documents from CGI, listing all investors, which reportedly include the former New York Yankees slugger and confessed drugs cheat Alex Rodriguez.

The sale marks the end of a controversial chapter in Trump’s rise. The real estate magnate opened the Trump International Hotel in the Old Post Office Building in 2016, during his run for the presidency.

In a statement on Wednesday, Eric Trump, Trump’s second son, said: “We took a dilapidated and underutilised building and transformed it into one of the most iconic hotels in the world.”

The hotel had long attracted criticism for perceived conflicts of interest. Recently, the Trump Organization and Trump’s 2017 presidential inaugural committee agreed to pay $750,000 to settle a suit brought by the District of Columbia attorney general that claimed the hotel received excessive payments from the committee.

On news of the settlement, Carolyn Maloney, the Democratic chair of the House oversight committee, said her concerns about the sale of the lease “had only increased”.

The building is still owned by the federal government, which approved the sale of the lease in March.

When Trump was in power, claims or lawsuits under the emoluments clause of the constitution, which covers gifts and payments to office holders, could not stick.

In 2019, Kathleen Clark, Washington University Law professor, told the Guardian: “For over a hundred years, the justice department has strictly interpreted the constitution’s anti-corruption emoluments clause to prohibit federal officials from accepting anything of value from foreign governments, absent congressional consent.

“In 2017, the department reversed course, adopting arguments nearly identical to those put forward by Trump’s private sector lawyers. Instead of defending the republic against foreign influence, the department … defend[ed] Trump’s ability to receive money from foreign governments.”

On Wednesday, the advocacy group Citizens for Responsibility and Ethics in Washington, or Crew, said: “The Trump Hotel in DC is no more. Good riddance to a sinkhole of corruption.”

But it also said: “We still have some questions … namely, whether a ‘premium sale price’ for a hotel that has been losing money is justified and what are the outstanding security risks to the hotel.”

Mark S Zaid, an attorney in Washington who specialises in cases involving the federal government, added: “I still count this as vindication for our legal efforts to remove Trump from this majestic building. We started an effort that contributed. It took longer than it should have.”

Sticker Shock: How to cope with the rising cost of inflation in Canada – Canadian News

Sticker Shock: How to cope with the rising cost of inflation in Canada - Canadian News

How Russia Could Respond If Finland Joins NATO | US News video