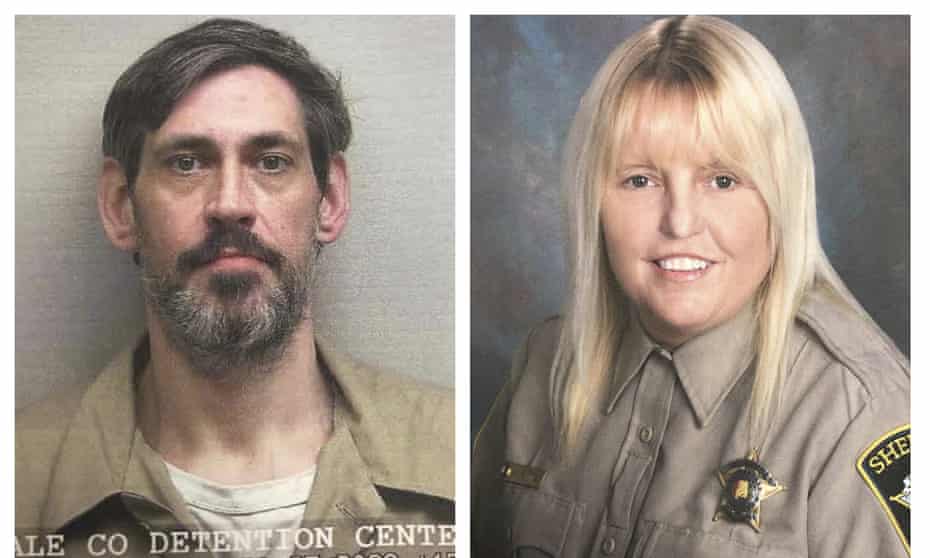 Vicky White spent 16 years developing a reputation as a model deputy in the sheriff’s office that operates the jail in Lauderdale county, Alabama, according to her boss.

Authorities now say that makes it harder to come to grips with how she became the lover of a murder suspect incarcerated at her lockup, helped him escape from custody, and went on the run with him for more than a week, traveling nearly 300 miles before shooting herself dead as police closed in.

“I had every bit of trust in Vicky White – she had been an exemplary employee and what in the world provoked her, prompted her to pull something like this, I don’t know,” the visibly shaken Lauderdale sheriff, Rick Singleton, said at a news conference on Monday. “I don’t know if we’ll ever know.”

The jailbreak and manhunt had captured public attention since it began on 29 April. As Singleton told it, shortly before the pair went missing, Vicky White had told colleagues – on what was supposed to be her last day working at the jail, where she was the assistant director – that she was taking detainee Casey White (no relation to her) to a local courthouse for a mental evaluation.

There was no such evaluation scheduled. Casey White was serving a 75-year prison sentence for attempted murder, among other charges, and was awaiting trial for the deadly stabbing of a woman in 2015. It was against jail policy for a correctional officer to leave alone with a detainee.

Vicky and Casey instead went straight to a shopping-center parking lot, according to investigators. They abandoned her patrol cruiser, got into an orange 2007 Ford Edge with no license plates, and hit the road.

As authorities realized they had disappeared, detainees at the Lauderdale jail came forward to report that the 56-year-old Vicky and 38-year-old Casey had engaged in a romantic relationship, Singleton said. Investigators independently confirmed those tips, and learned Vicky had recently sold her house for about half its market value before buying the getaway car.

The Edge was later found abandoned in Tennessee, before a tip led authorities to surveillance video from a carwash in Evansville, Indiana, which appeared to show the 6ft 9in, 260lb Caseydriving a 2006 Ford F-150 pickup.

Chad Hunt of the US marshals service, which helps local law enforcement agencies catch fugitives, told CBS News that Casey left the truck at the car wash and switched to a gray Cadillac.

It was that Cadillac which officers eventually spotted at a hotel in Evansville, about 270 miles from the Lauderdale jail, where they saw Vicky donning a wig, Hunt told CBS. As officers approached, the fugitives took off in the car.

Police gave chase for about 15 minutes before the Cadillac crashed. As officers neared the wrecked vehicle, Casey White – who could face the death penalty if convicted of the murder charge against him – surrendered immediately.

Casey White has waived extradition proceedings, setting the stage for his relatively quick return to Alabama, an Indiana official told the Associated Press.

“Please help my wife – she just shot herself in the head,” Hunt quoted Casey as saying when officers closed in, giving a hint as to how the couple saw their relationship.

Vicky was taken to a hospital to be treated for her head wound but died there, the local coroner, Steve Lockyear, told various news media.

Singleton said he had no ill feelings for Vicky White and had hoped to get answers from her about her conduct. But the sheriff struck a different tone when it came to Casey White, celebrating that officials had gotten “a dangerous man off the street”.

“He is never going to see the light of day again,” Singleton said. “That is a good thing.”

Some compared the Whites’ story to the 2015 escape of convicted murderers Richard Matt and David Sweat from upstate New York’s Clinton correctional center. The pair temporarily broke out of custody with help from Clinton correctional officer Joyce Mitchell, who purportedly had a sexual relationship with at least one of the escapers and was convicted of facilitating the getaway in events dramatized on the 2018 Showtime miniseries Escape at Dannemora.

Corporate investors to blame for housing crisis: MP | 'Canadians are getting kicked in the teeth' | Canada News