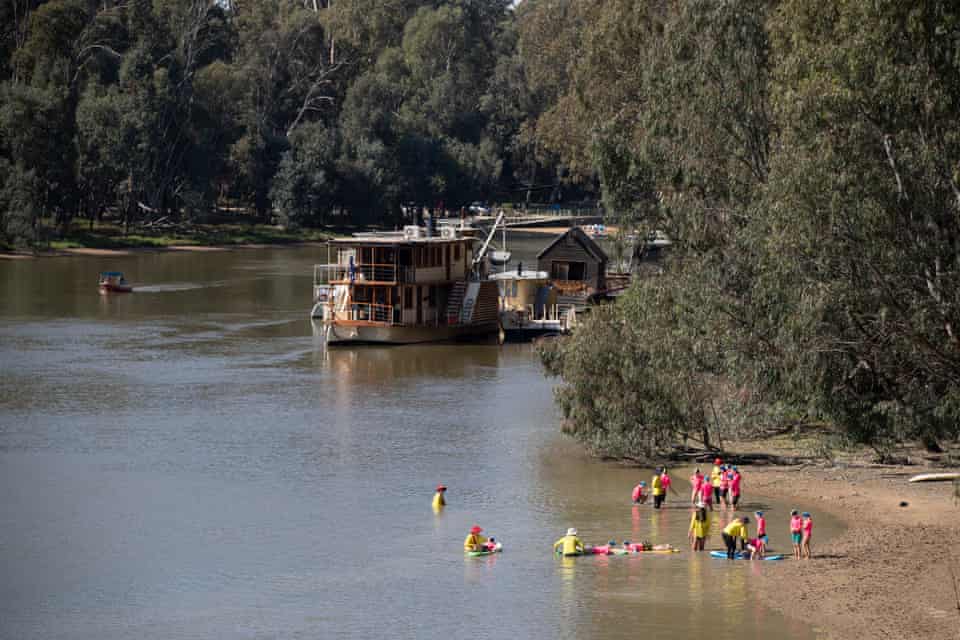 The first thing Mooroopna local Betul Tuna wants in a politician is honesty. A close second would be “a human”.

“I think that’s what I would love. Just a human. A human with human values and that just looks at someone and goes, ‘You know what, you are equal to me, you deserve what I have which is respect and equal rights’.”

Tuna is the daughter of Turkish migrants who came to work on the fruit farms. She works with the marginalised and disenfranchised in the division of Nicholls. Her town, Mooroopna, is on the outskirts of Shepparton (population 60,000), the largest centre in the seat.

“Support the farmers, support the land in a way where it’s not making the workers more vulnerable,” Tuna says.

Nicholls largely covers the footprint of the Goulburn Valley in Victoria, a food bowl identified by its fruit and dairying. If you’ve ever had a tin of SPC tomatoes, it probably came from Nicholls.

Water management and the Murray-Darling Basin Plan are significant for the small and large agricultural, horticultural and processing businesses in the area. For employers, labour is a critical issue after two years of closed borders, while pay and conditions occupy the minds of the workers.

The food processing industry has attracted greater cultural diversity than the average rural seat. There is a strong refugee community in Shepparton, following previous waves of migrants, attracted to fruit-picking work. That also means it has a significant temporary resident population, locked out of most government services and voting.

‘Created out of agriculture’

The Victorian independent MP Suzanna Sheed’s state seat of Shepparton is wholly contained within Nicholls boundaries. She says in campaigning terms, any federal MP has to win the largest centres in Shepparton and nearby Mooroopna but also outlying towns like Echuca, Kyabram, Tatura, Yarrawonga, Cobram, Numurkah and Nathalia are all important.

“They are all in the irrigation district … people who live in this area know that we were only ever created out of agriculture. And then water coming and irrigation has been just the absolute basis of everything that’s happened here,” Sheed says.

Nicholls has a margin of 20%; it is the sixth-safest seat in the country. But the current National party MP, Damien Drum, is retiring. That means, under the rules of the Coalition partnership, the Nationals and the Liberals can run against each other. And Nicholls is not a wholly-owned subsidiary of the National party; it was held by the Liberal MP Sharman Stone for 20 years.

Add to that mix a high-profile independent, Rob Priestly, who looks like a Liberal candidate from central casting. Priestly is a former chair of the Committee for Greater Shepparton (C4GS) and is a local councillor for Greater Shepparton. He is mates with the Nationals’ preselected candidate, the former C4GS chief executive officer Sam Birrell, following their time together on that key local economic development organisation.

While Priestly presents like a teal independent, he is not a Voices For candidate. There is a Voices For Nicholls organisation but that group has not endorsed any candidates. Priestly says he was inspired to run as an alternative to the major parties and to get change on water management, climate change transition and federal integrity.

“I feel like our community’s voice is lost in a National party that’s dedicated to the interests of northern New South Wales and Queensland,” Priestly says.

His candidacy is certainly forcing the Coalition parties to spend more time and money in the south. He is not shy to say that his is a “very well-funded campaign” raised from within the electorate; farmers, small business people, everyday donors. He says he won’t take money from Climate 200 or lobby groups like tobacco and alcohol.

His Nationals rival, Birrell, has been flanked by senior government ministers including Barnaby Joyce and Bridget McKenzie since the start of the campaign. He presents as a more progressive Nat, in contrast to his leader, Joyce, but he remains committed to the party’s policies; Joyce does not feature on Birrell’s campaign material. At his launch, he sang Oasis and U2.

But while he talks about the effect of climate change on the water in the Murray-Darling basin, Birrell does not believe more water should be taken out of the consumptive pool – the amount of water available for use under a management plan – for irrigators.

“The point is that if any more is taken, there’s only … so many efficiencies that can be gained. And I think we’re at that point. So we were saying no more can be taken away.”

The Liberal party’s candidate, Steve Brooks, is a grain trader, pomegranate farmer and teacher. He is an unusual choice because his father, Chris Brooks – an ex-grain trader and farmer – has been a thorn in the side of the Coalition over water management and is currently involved in a class action against the Murray-Darling Basin Authority.

Steve Brooks has made it clear he will also push for changes to water management, like his father. Stone is his campaign manager. And from his early days in the campaign, he appears the most combative of the candidates – recently attacking his opponents in a local opinion piece over the failure of the Nationals on water management advocacy.

“People will decide, do they want a National party candidate … whose boss is Barnaby Joyce, or do they want me who is in the Liberal party,” Brooks tells the Guardian.

Brooks will oppose the removal of the 450GL of extra water promised to South Australia as part of the Murray-Darling Basin Plan.

“The 450[GL] is a big issue, but also the way the Basin Authority … try and achieve their objectives in the way they run the river causes massive damage, and it’s also huge losses. And those losses, just to add insult to injury, they come out of our irrigator’s consumptive pool … that reduces the food and fibre that we can produce in this region.”

Guardian Australia visited Nicholls in the first week of the campaign. Anthony Albanese had just fluffed the national employment and cash rate numbers and the story was at the top of the news bulletins for the days we were there. The voters we spoke to were a mix of those we approached on the street or dropped in to visit.

David Jacotine, a meat buyer, was having lunch outside the Kyabram bakery. The biggest issue for him is water.

“Water has got very expensive, followed by land prices. Land prices have skyrocketed around here. So if I was running for politics, that’s what I would be going for,” Jacotine said.

He thought Sharman Stone was a good Liberal member but he thinks Birrell will win.

“I honestly believe if you got that little dog that was walking along before and put him up as the National party candidate he would win it hands down, because this area has been a very, very strong National party area and, rightly or wrongly, they seem to always win,” Jacotine said.

“Mind you, I don’t think they do a lot for the farmers here, but that’s another story.”

Pam, who didn’t want to give her last name, has not always voted for the Coalition but would this time.

“Probably where I am in my life, it suits me better for them to be in,” she said.

“We should stay with the prime minister we’ve got. Especially after the big blunder [from Albanese] yesterday.”

When you drive around the streets, you can see the facilities for the big-name food brands that fill our shopping trolleys: SPC, Ardmona, Bega, Unilever, Parmalat, Fonterra, Campbell’s.

Matt O’Connor, 27, works at Campbell Soup as a blender, mixing things like beef and chicken stock. Post-pandemic, his employer Campbell’s is investing $8m in the plant, declaring “cans are now becoming sexy again”.

O’Connor was having a beer in the back bar of the Australia hotel in Shepparton after his shift. He had noticed election posters but he wasn’t sure how he would vote.

Notwithstanding the current low unemployment rate, Matt thought jobs were the biggest issue in his area as he wanted to see the town grow.

Fazela Abbasi, 26, is a family support specialist at Save The Children. She is the daughter of an Afghani Hazara refugee, who came to Australia in 1999. Like many adult children of refugees, she remains essential to her non-English speaking parents to navigate health and other government services.

“We’ve been seeing … a decline in patient intake at the emergency rooms. You know, there’s a huge waiting line, usually when we go there. It wasn’t as bad pre-Covid. But I think Covid just made it super hard for healthcare workers to get to every patient.”

“It’s not always easy to predict when you’re going to be sick but that seems to be the case,” he said. “The medical system in this area is an absolute shambles and I really think the government should be ashamed of themselves – either government.”

In Echuca, Sue, who also did not want to give her last name, said she would probably vote for “ScoMo” again.

“Nobody has ever lived through a pandemic before. He was thrown in head-first too, and all the opposition is doing is bagging everything he does, yet they’ve got no policies I can see that are any better.”

David Andrews is a former shearer and wool presser from Tongala. Now he collects trolleys. He was a lifelong Labor voter who is considering changing to the United Australia party.

“[I’ll] give someone else a go cos’ they are buggering it up, aren’t they?”

“I’ve always supported the Labor government all the time but these days, it’s hard to tell who’s telling the truth and going to do what they say they are doing.”

Asked what he thought of Scott Morrison, Andrews said “not much”.

“Bit of a liar. Same with the other bloke. He told lies on the first day.”

Habiba Ibrahimi, 25, is a coordinator for the La Trobe Bradford Shepparton pathway program to help year 12 students transition to university. She is looking for leadership.

“Hopefully, someone comes aboard and actually addresses the things that … actually everyone can benefit from, and someone who is actually more active than going on holidays during the crisis,” she said.

“Especially during the bushfires, flooding and everything else that has happened [with] Covid.”

Tony Indriolo owns Cobram Fine Foods. He was delivering a shipment of big arancini balls at 8am to a cafe in Cobram. He follows the election every day and reckons Scott Morrison is a good prime minister. He worries about him “going down”.

While he thought Albanese was a gentleman, he did not consider him a good politician.

‘I felt I was being assessed on my skin colour’: Black women around the world share their birth stories | international News

Firefighter numbers in England down 20% since 2010, analysis shows | international News