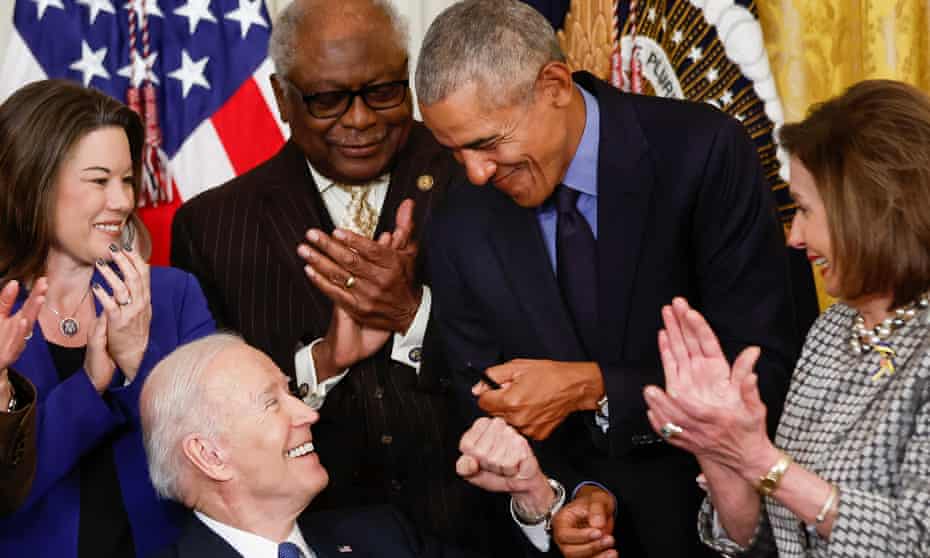 It was Back to the Future at the White House. Starring Barack Obama as Marty McFly and Joe Biden as Doc Brown. And ignoring Donald Trump as Biff Tannen, a four-year rupture in the space-time continuum.

Obama returned to the White House on Tuesday for the first time since the bleak winter morning in January 2017 when he departed it alongside Trump, who seemed intent on erasing the first Black president.

Like a star pupil going back to his old school, proud and shiny with career accomplishments, the 44th US president was greeted by gushing staff probably too polite to mention his ever-greying hair. He was hosted in the Oval Office by the protege who happens to be 19 years his senior.

They had lunch, just like they used to when Obama was in charge and Biden was vice-president. “We weren’t sure who was supposed to sit where,” the 46th president said later with a grin.

What did they talk about? Trump? Ukraine? Biden’s bungled departure from Afghanistan? Hopefully the conversation was less awkward than their lunches in 2015 when Obama, having anointed Hillary Clinton as his successor, gently steered Biden away from running for president.

“The president was not encouraging,” Biden wrote in his memoir Promise Me, Dad.

Who knows whether Biden would have beaten Trump in 2016 but he did so four years later and so gained the throne after all. Now, with his approval rating flagging, it was time to call in a favour and a shot of charisma from his old boss.

Obama’s signature healthcare law was not politically popular at the time and resulted in a “shellacking” by Republicans in the 2010 midterm elections. But now the Affordable Care Act is a fixture and Biden needs a political boost ahead of his own trial-by-midterms.

In the East Room – they cancelled the Rose Garden due to rain – he got Obama to talk about the law and how many people it’s helped before Biden signed an executive order to strengthen it.

It was also an exercise in nostalgia for that (seemingly) simple pre-Trump, pre-Brexit, pre-pandemic, pre-George Floyd murder, pre-Ukraine-war world when the definition of controversy was sometimes no more than the president wearing a tan suit.

“Vice-President Biden,” Obama began at a lectern bearing the presidential seal, prompting loud laughter from the audience. Obama added, “That was a joke!”, walked over to Biden, shook hands, leaned in and patted his back. Biden applauded. Obama added: “That was all set up. My president, Joe Biden.”

Not that any clarification will stop Fox News, QAnon followers and internet conspiracy theorists claiming it as proof that Obama is still running the government after all.

Obama, who has since delved into TV production and memoir writing, went on: “It is good to be back in the White House. It’s been a while. I confess I heard some changes have been made by the current president since I was last here.”

Acknowledging Biden’s penchant for shades and ice cream, Obama went on: “Apparently Secret Service agents have to wear aviator glasses now. The navy mess has been replaced by a Baskin Robbins. And there’s a cat running around which I guarantee you Bo and Sunny [his pet dogs] would have been very unhappy about.

“But coming back – even if I have to wear a tie, which I very rarely do these days – gives me a chance to visit with some of the incredible people who serve this White House and who serve this country every single day, a lot of times out of the limelight.”

He described Biden as “an extraordinary friend and partner who was by my side for eight years”, adding: “Joe Biden and I did a lot together.” The East Room erupted in clapping and whoops. Vice-President Kamala Harris, standing on stage, turned to Biden and applauded him.

Harriet Hageman: who is the Republican who beat Liz Cheney? | US News

Obama reeled off a list, from saving the global economy to repealing the homophobic don’t ask/don’t tell law about LGBTQ members of the military, “but nothing made me prouder than providing better healthcare and protections for millions of people across this country”.

And America has only become more divided since Obama left office. He went on a little wistfully: “I’m a private citizen now. But I still take more than a passing interest in the course of our democracy.”

He shook hands with and embraced Biden again, who walked to the lectern and played his part. “My name is Joe Biden and I’m Barack Obama’s vice-president,” he said to laughter. “Welcome back to the White House, man. It feels like the good old days.”

Yet early in his presidency, it seemed that Biden’s ambitions would outstrip Obama’s. He plotted a sweeping social, economic and climate agenda that made critics suggest Obama thought too small. Much of it has foundered, however, as political gravity brought Biden back to earth.

On Tuesday it turned out he needs some of the Obama magic after all. After signing the executive order on a tiny table, 46 turned and handed the pen to 44. The pair smiled and exchanged a fist bump and all that was missing was a rendition of The Way We Were.

Can it be that it was all so simple then? Or has time rewritten every line?
If we had the chance to do it all again
Tell me, would we?
Could we?

Harriet Hageman: who is the Republican who beat Liz Cheney? | US News

There's no one in charge of NASA's mega-moon program. And the countdown clock is ticking. | Political News