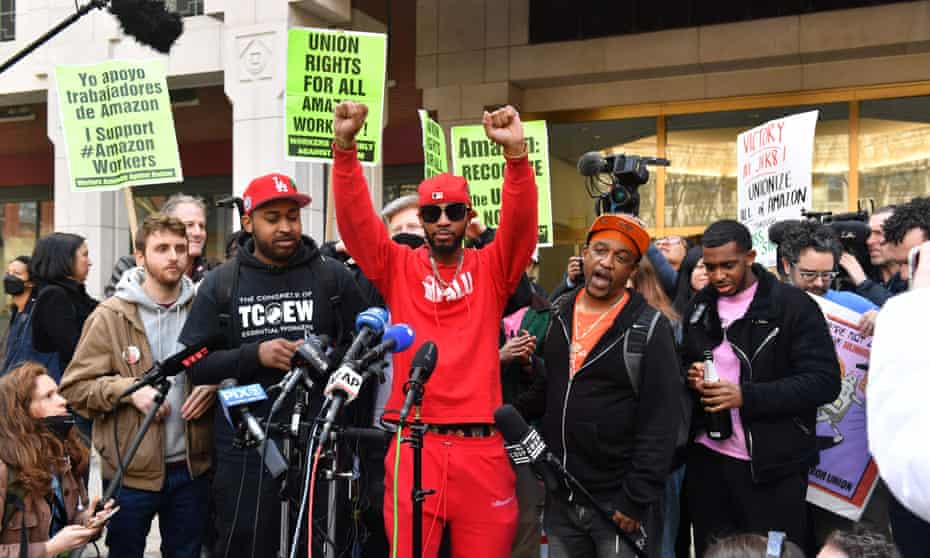 Amazon workers in New York have voted to form a union in what labor leaders are calling a “historic victory” against the US’s second largest employer.

In Staten Island, New York, 2,654 warehouse workers voted yes to forming a union, while 2,131 voted no, according to a tally by the National Labor Relations Board (NLRB).

Meanwhile, in another union vote, Amazon workers in Bessemer, Alabama, appear to have rejected a union bid – but outstanding challenged ballots could change the outcome. The votes were 993 to 875 against the union. A hearing to review 416 challenged ballots is expected to begin in the next few days.

The Staten Island victory marks the first successful US organizing effort in the company’s history. Organizers have faced an uphill battle against Amazon, which now employs over one million people in the US and is making every effort to keep unions out.

Seth Goldstein, a pro bono attorney who has represented the Amazon Labor Union in Staten Island through their election proceedings, said: “Worker engagement has been the key to this historic victory and can be attributed to increased nationwide union organizing in digital, tech, non-profit and Starbucks. Gen Z and millennial workers are leading the charge in union organizing.”

John Logan, director of labor and employment studies at San Francisco State University, said the early vote counts in New York had been “shocking”. The nascent Amazon Labor Union (ALU), which led the charge on Staten Island, has no backing from an established union and is powered by former and current warehouse workers.

“I don’t think that many people thought that the Amazon Labor Union had much of a chance of winning at all,” Logan said. “And I think we’re likely to see more of those [approaches] going forward.”

After a crushing defeat last year in Bessemer, when a majority of workers voted against forming a union, the Retail, Wholesale and Department Store Union (RWDSU) got a second chance to organize another campaign when the NLRB ordered a do-over after determining that Amazon tainted the first election.

Stuart Appelbaum, president of the RWDSU, said on Thursday that the union would be filing objections to how Amazon handled the election in Bessemer but declined to specify. He also took the opportunity to lash out at current labor laws, which he believes are rigged against unions and favor corporations.

“It should not be so difficult to organize a union in the United States,” he said.

Chris Smalls, a fired Amazon employee who has been leading the ALU in its fight on Staten Island, remains hopeful of victory.

“To be leading in day one and be up a couple hundred against a trillion-dollar company, this is the best feeling in the world,” Smalls said after the conclusion of Thursday’s counting.

While Smalls’s attention has been focused on securing victory in New York, the efforts in Alabama also weighed heavily.

“I’m not too sure what’s going on in Alabama right now, but I know that the sky’s the limit if you can organize any warehouse,” he said, noting that the vote in Alabama could well end up differently. “I hope that they’re successful. I don’t know what’s going on yet, but we know we show our support and solidarity with them.”

Amazon has pushed back hard in the lead-up to both elections.

In a filing released on Thursday, Amazon disclosed it spent about $4.2m last year on labor consultants, who organizers say the retailer routinely solicits to persuade workers not to unionize. It’s unclear how much it spent on such services in 2022.

The mostly Black workforce at the Amazon facility, which opened in 2020, mirrors the Bessemer population of more than 70% Black residents, according to the latest US census data.

Pro-union workers say they want better working conditions, longer breaks and higher wages. Regular full-time employees at the Bessemer facility earn at least $15.80 an hour, higher than the estimated $14.55 per hour on average in the city. That figure is based on an analysis of the US Census Bureau’s annual median household income for Bessemer of $30,284, which could include more than one worker.

The ALU said they don’t have a demographic breakdown of the warehouse workers on Staten Island and Amazon declined to provide the information to the Associated Press, citing the union vote. Internal records leaked to the New York Times from 2019 showed more than 60% of the hourly associates at the facility were Black or Latino, while most of managers were white or Asian.

Amazon workers there are seeking longer breaks, paid time off for injured employees and an hourly wage of $30, up from a minimum of just over $18 per hour offered by the company. The estimated average wage for the borough is $41 per hour, according to a similar US Census Bureau analysis of Staten Island’s $85,381 median household income.

A spokesperson for Amazon said the company invests in wages and benefits, such as health care, 401(k) plans and a prepaid college tuition program to help grow workers’ careers.

“As a company, we don’t think unions are the best answer for our employees,” the spokesperson said in an emailed statement. “Our focus remains on working directly with our team to continue making Amazon a great place to work.”

Associated Press contributed to this story

Author Salman Rushdie Taken Off Ventilator After Showing Signs Of Improvement, According To His Son | US News video

With federal alcohol tax set to increase, MPs advance bills to rein it in | Canada News