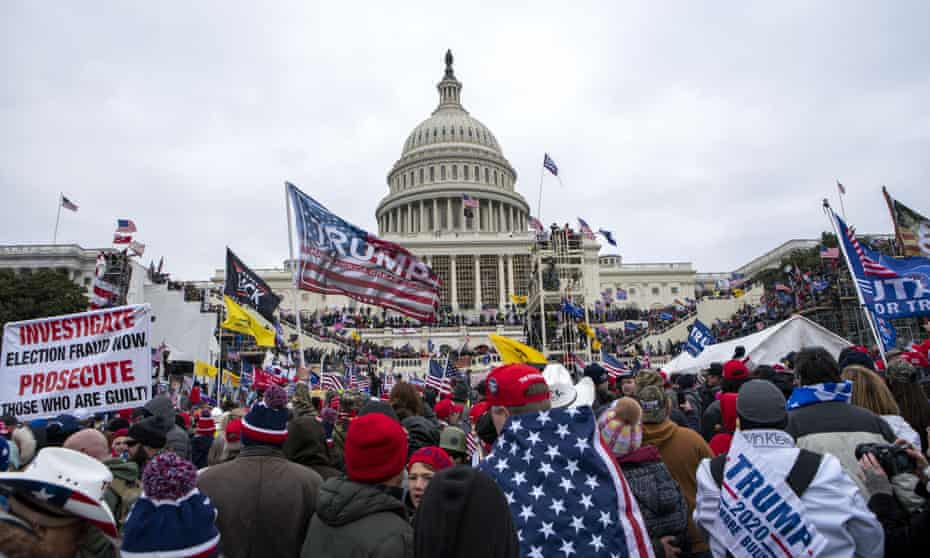 The House select committee investigating the Capitol attack is examining whether Donald Trump oversaw a criminal conspiracy on 6 January that connected the White House’s scheme to stop Joe Biden’s certification with the insurrection, say two senior sources familiar with the matter.

The committee’s new focus on the potential for a conspiracy marks an aggressive escalation in its inquiry as it confronts evidence that suggests the former president potentially engaged in criminal conduct egregious enough to warrant a referral to the justice department.

House investigators are interested in whether Trump oversaw a criminal conspiracy after communications turned over by Trump’s former chief of staff Mark Meadows and others suggested the White House coordinated efforts to stop Biden’s certification, the sources said.

The select committee has several thousand messages, among which include some that suggest the Trump White House briefed a number of House Republicans on its plan for then-vice president Mike Pence to abuse his ceremonial role and not certify Biden’s win, the sources said.

The fact that the select committee has messages suggesting the Trump White House directed Republican members of Congress to execute a scheme to stop Biden’s certification is significant as it could give rise to the panel considering referrals for potential crimes, the sources said.

Members and counsel on the select committee are examining in the first instance whether in seeking to stop the certification, Trump and his aides violated the federal law that prohibits obstruction of a congressional proceeding – the joint session on 6 January – the sources said.

The select committee believes, the sources said, that Trump may be culpable for an obstruction charge given he failed for hours to intervene to stop the violence at the Capitol perpetrated by his supporters in his name.

But the select committee is also looking at whether Trump oversaw an unlawful conspiracy that involved coordination between the “political elements” of the White House plan communicated to Republican lawmakers and extremist groups that stormed the Capitol, the sources said.

That would probably be the most serious charge for which the select committee might consider a referral, as it considers a range of other criminal conduct that has emerged in recent weeks from obstruction to potential wire fraud by the GOP.

The vice-chair of the select committee, the Republican congresswoman Liz Cheney, referenced the obstruction charge when she read from the criminal code before members voted unanimously last November to recommend Meadows in contempt of Congress for refusing to testify.

The Guardian previously reported that Trump personally directed lawyers and political operatives working from the Willard hotel in Washington DC to find ways to stop Biden’s certification from happening at all on 6 January just hours before the Capitol attack.

But House investigators are yet to find evidence tying Trump personally to the Capitol attack, the sources said, and may ultimately only recommend referrals for the straight obstruction charge, which has already been brought against around 275 rioters, rather than for conspiracy.

The justice department could yet charge Trump and aides separate to the select committee investigation, but one of sources said the panel – as of mid-December – had no idea whether the agency is actively examining potential criminality by the former president.

Still, the select committee appears to be moving towards making at least some referrals – or alternatively recommendations in its final report – that an aggressive prosecutor at the justice department could use to pursue a criminal inquiry, the sources said.

The select committee is examining the evidence principally to identify legislative reforms to prevent a repeat of Trump’s plan to subvert the election, but members say if they find Trump violated federal law, they have an obligation to refer that to the justice department.

Sending a criminal referral to the justice department – essentially a recommendation for prosecution – carries no formal legal weight since Congress lacks the authority to force it to open a case, and House investigators have no authority to charge witnesses with a crime.

But a credible criminal referral from the select committee could have a substantial political effect given the importance of the 6 January inquiry, and place pressure on the attorney general, Merrick Garland, to initiate an investigation, or explain why he might not do so.

​​Internal discussions about criminal referrals intensified after communications turned over by Meadows revealed alarming lines of communication between the Trump White House and Republican lawmakers over 6 January, the sources said.

In one exchange released by the select committee, one Republican lawmaker texted Meadows an apology for not pulling off what might have amounted to a coup, saying 6 January was a “terrible day” not because of the attack, but because they were unable to stop Biden’s certification.

The select committee believes messages such as that text – as well as remarks from a Republican on the House floor as the Capitol came under attack – might represent one part of a conspiracy by the White House to obstruct the joint session, the sources said.

Bennie Thompson, the chairman of the select committee, added on ABC last week that the investigation had found evidence to suggest the events of 6 January “appeared to be a coordinated effort on the part of a number of people to undermine the election”.

Counsel for the select committee indicated in their contempt of Congress report for Meadows that they intended to ask Trump’s former chief of staff about those communications he turned over voluntarily, before he broke off a cooperation deal and refused to testify.

Thompson has also suggested to reporters that he believes Meadows stopped cooperating with the inquiry in part because of pressure from Trump, but the select committee has not opened a separate witness intimidation investigation into the former president, one of the sources said.

ERG out, CRG in: the Tory factions Boris Johnson is struggling to appease | Corona News

ERG out, CRG in: the Tory factions Boris Johnson is struggling to appease | Corona News

What are the different Conservative factions? | Corona News