Home » USA » Michigan leads US in Covid case count, accounting for one in 10 new cases | US News

Michigan leads US in Covid case count, accounting for one in 10 new cases | US News 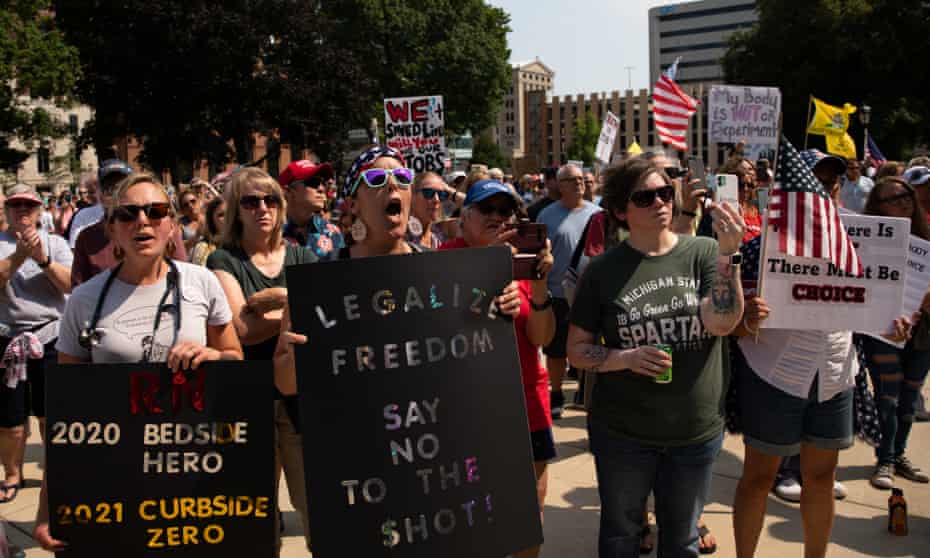 Michigan is now leading the country in new Covid cases and hospitalizations, accounting for about one in 10 new cases in the US, even though the state represents only 3% of the country’s population.

Cases across the US have risen by 18% in the past week, but some states have seen much more dramatic increases. In Michigan, new cases have gone up by 67% and new hospitalizations by 46% in the past two weeks.

A week or so ago, cases in the state were fairly steady, at about 5,000. Then they shot up to about 8,000 in just a few days. “It was astonishing, the rapid increase,” Sousa said.

Now hospitals are full and patients are being treated in hallways and recovery lounges, while deaths are going up.

“It’s actually as bad as or worse than it was during our last big peak in April or the peak that we saw the November-December before that,” Sousa said.

And what’s happening in Michigan is a sign of what’s likely to come in other parts of the US, particularly in states with low vaccination rates.

“I don’t think there’s anything unique about Michigan,” Adam Lauring, an ​​associate professor of infectious disease and microbiology at the University of Michigan Medical School, told the Guardian.

Some Northern states have seen the big increases recently as people headed indoors in cooler weather. But as winter and holidays approach, other states could see dramatic surges like these as well.

“This is exactly what happened in November of last year. The timing is almost exact, when we had our fall surge,” Lauring said.

More than half of the state, 54.8%, is now fully vaccinated, which is lower than the national average.

More than 10% of children aged five to 11 have received their first doses of the vaccine. Several school districts, facing outbreaks and staff shortages, are closing temporarily.

“The best predictors of case levels are going to be your vaccination coverage,” said Lauring. “The counties that have high vaccination rates have lower case rates.”

The reasons behind any rise in cases are complicated. “However, those who are not immunized contribute disproportionately to hospitalizations and deaths due to Covid-19 in Michigan,” Chelsea Wuth, a public information officer with the Michigan Department of Health and Human Services, told the Guardian in an email. Three-quarters of recent hospitalizations and deaths were among those not fully vaccinated.

“As more individuals are vaccinated, it is less likely that the virus will circulate and mutate, avoiding the development of more transmissible and vaccine-resistant variants in the future,” Wuth said.

“If you aren’t vaccinated, you’re gonna get it,” Sousa said. And “there are still a lot of people who haven’t previously gotten sick and haven’t been vaccinated,” so the surge will likely continue at least for a few weeks.

Experts hope that higher rates of vaccinations will mean a rise in cases will not necessarily result in more hospitalizations or deaths. While vaccinated people can have breakthrough infections, they are much less likely to get very sick or die from Covid – which also puts less strain on health systems.

In response to rising cases, Michigan last Friday recommended that all residents above the age of 2 wear a face mask indoors, as well as urging the early use of monoclonal antibodies among those who test positive and vaccinations for all who are eligible.

“Covid-19 cases are high as we head into the holidays, and we must take every measure we can to keep our families and loved ones safe – which starts with getting vaccinated,” Dr Natasha Bagdasarian, chief medical executive, said in a statement.

The University of Michigan is also seeing a major outbreak of influenza, with 760 cases reported since the beginning of October. The flu and other respiratory illnesses can put a strain on hospitals in normal times; layering Covid on top of a bad flu year could be catastrophic.

“It doesn’t take a whole lot of cases to overwhelm a hospital system,” Lauring said.

It’s not just about not having enough room at hospitals to treat patients. “You have to have enough staff to take care of everybody,” Sousa said, including physicians, nurses, respiratory techs, phlebotomists and housekeepers. “And all those people have been working flat out for just shy of two years.”

A surge in cases is not inevitable, though. Proven precautions can help tamp down the rise now.

Vaccination, in particular, is critical to preventing long Covid, severe illness and death – and, ultimately, to ending the pandemic.

“Until we build up enough immunity, through vaccination or infection, we’re going to continue to have these surges,” Lauring said.