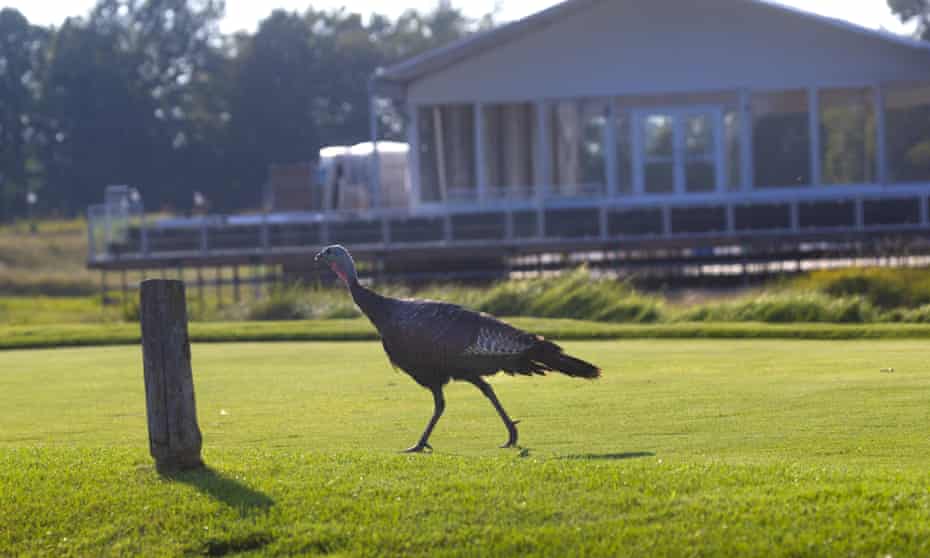 A Wisconsin city has been buoyed by a “rebel” wild turkey, residents say, with the bird inspiring charity events and Halloween outfits and even being awarded a local celebrity prize.

The turkey, named Carl, has charmed locals in Kenosha ever since his arrival more than two years ago, and has since garnered a huge following. A Facebook group dedicated to the turkey, who stands at 2ft tall and is covered in rich brown plumage, has more than 5,000 members and is flooded by reports of sightings.

Wild turkeys are not uncommon in urban areas in Kenosha and elsewhere, but Carl has become particularly recognizable for his scant regard for Wisconsin highway laws, regularly stopping traffic to peck enthusiastically at car wheels.

With a sky blue head and scarlet red wattle, Carl is a daily sight in the Forest Park neighborhood, in the west of Kenosha, and has been a welcome diversion from the contentious Kyle Rittenhouse shooting trial, which has divided the city. Rittenhouse was charged with homicide and attempted homicide after he shot and killed two people, and wounded another, during a George Floyd protest in August 2020. He was found not guilty last week.

“Kenosha has had a really rough year, especially with the trial,” Lisa Hawkins said. She sees Carl almost every day, and started his Facebook group.

“He makes everyone smile, even though he gets into traffic and disrupts and holds things up,” Hawkins said. “I think it is pretty amazing how this turkey has been able to be the one thing that we can all get behind and smile and laugh.” She said Carl’s rise to fame had even prompted discussion among members of the Facebook group about alternatives to eating turkey this Thanksgiving.

The turkey has little respect for the rule of law, however.

“There was a video posted the other day where he was on top of a police officer’s car. He’s kind of a rebel,” Hawkins said.

Such is Carl’s popularity that he was named “Kenoshan of the week” by Kenosha.com in September.

“He has so many fans I think people are looking out for him,” local resident Paul Merklin said. “It’s like having a mascot. He could be the mascot of Kenosha.”

Hawkins said Carl avoided early efforts to capture him, in part because he is able to fly, which animal officials are unable to do. According to Bird Watching Daily, turkeys can fly at up to 50 miles an hour, and are also able to swim when required, “by tucking their wings in close, spreading their tails, and kicking”.

Since his arrival in Kenosha, Carl has inspired a charity drive for a wildlife hospital, and local businesses have reported increased sales after introducing Carl-themed products, including cakes, T-shirts and car stickers. Carl has been honored in song, by local musician Keith Pauley, in the Ballad of Carl the Kenosha Turkey.

“In the city of Kenosha there’s an outlaw running loose, in the streets and on the sidewalks, in the trees where he may roost,” Pauley sings. “He’s a champion of the people and an enemy of the law, the mayor would like to catch him, and ship him out to Bong.”

During his rise to fame there was reportedly some discussion among local politicos of catching Carl and transporting him to the Richard Bong state recreation area. The inability of animal specialists to apprehend the bird ultimately rendered the debate moot, and Carl has remained at large, free to continue to charm local residents.

“For a lot of people, Carl seems to represent hope, he often brings smiles and laughter,” Michael Nelson wrote in Kenosha’s Happenings magazine.

“Carl’s presence and behavior seems to be helping teach so many that life is too short and maybe it’s time to slow down, enjoy everything life has to offer.”

Police and ADF deployed to the Solomon Islands amid unrest