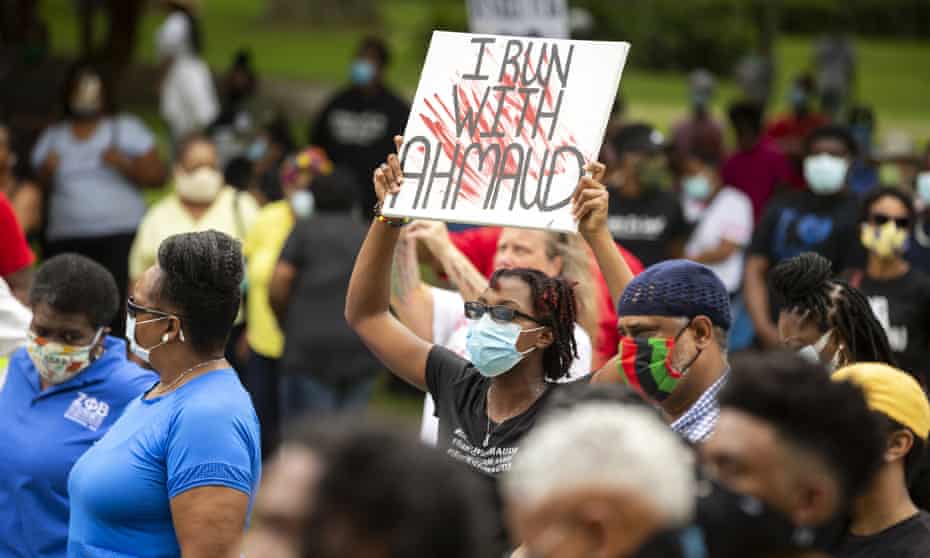 The conviction of the three white men accused of murdering Ahmaud Arbery, a 25-year old Black man who was killed while out jogging in Georgia, came after nearly a month of a closely watched trial.

Like the Kyle Rittenhouse trial, the trial of Gregory McMichael, 67, his 35-year old son Travis McMichael and their neighbor William “Roddie” Bryan, 52, has shed light on the fierce debate over the boundaries of self-defense and gun rights across the United States.

It has also come to symbolise how America’s legal system treats Black Americans and the experiences that many have of facing danger and violence when simply doing ordinary things that other people take for granted.

Here are five key moments that happened as the courtroom drama in trial of Arbery’s killers played out:

Earlier this month, a nearly all-white jury was selected after defense attorneys eliminated almost all Black jurors from the pool.

Throughout a jury selection period that lasted 11 days, lawyers were given a pool of 48 potential jurors, 12 of whom were Black. However, defense lawyers of the McMichaels and Bryan struck all but one of them from the final jury, leaving 11 white members and one Black member.

Defense attorney Kevin Gough previously said in an interview with the Atlanta Journal Constitution that the case’s jury selection pool lacked “bubbas or Joe six-packs”, referring to white men over 40 without a college degree.

Prosecutors urged Judge Timothy Walmsley to reverse the unseating of eight Black potential jurors, whom they argue had been deliberately targeted over race. Despite Walmsley’s acknowledgment of the “intentional discrimination”, he cited limitations in the supreme court precedent and said that the defense presented legitimate reasons to justify the strike of the Black potential jurors that were unrelated to race.

‘We don’t want any more Black pastors in here’

Kevin Gough, a defense attorney, sparked outrage during the trial when he asked the court to limit the number of Black pastors who could sit with the Arbery family, arguing that their presence could sway the almost entirely white jury.

“If we’re going to start a precedent … where we’re going to bring high-profile members of the African American community into the courtroom, to sit with the family during the trial in the presence of the jury, I believe that’s intimidating and it’s an attempt to pressure – could be consciously or unconsciously – an attempt to pressure or influence the jury,” Gough said.

“There’s only so many pastors they [Arbery’s family] can have. If their pastor’s Rev Al Sharpton right now, that’s fine. But that’s it. We don’t want any more Black pastors in here or others,” he added.

Jurors were shown graphic pictures of Arbery’s autopsy, including pictures of shotgun wounds that punched a fist-sized hole in his chest and Arbery’s white T-shirt, stained entirely red after he bled profusely.

Dr Edmund Donoghue, a medical examiner for the Georgia Bureau of Investigation, testified that Arbery was hit by two of three shotgun rounds fired, adding that either blast alone would have killed him.

The first shot at close range tore an artery in Arbery’s right wrist and hit his chest, breaking several ribs and causing heavy internal bleeding. The second shot missed. The third, point-blank, punctured a major artery and vein near Arbery’s left armpit and fractured bones in his shoulder and upper arm.

Arbery’s mother, Wanda Cooper-Jones, hung her head and wept quietly as his autopsy photos were displayed in the courtroom.

‘He was just running’

Last Thursday, Linda Dunikoski, Cobb county’s senior assistant district attorney and lead prosecutor, cross-examined Travis McMichael and drew out a series of inconsistencies in the account of events that he told police the day of the shooting and during his testimony at court.

Dunikoski pressed McMichael on why he did not include his testimony in his written statement to police, namely the part about telling Arbery police were on their way. Travis said he was “under stress, nervous and scared” during his police interview.

“What were you nervous about?” Dunikoski asked.

“I just killed a man,” McMichael said. “I had blood on myself. It was the most traumatic event of my life.”

“You were nervous because you thought you were going to jail, right?” Dunikoski asked.

“No. I gave them a statement,” McMichael said.

Dunikoski raised doubts on whether Arbery, who was unarmed, actually posed a threat to the three armed white men.

“Did Mr Arbery reach into his pockets?” she asked, adding: “Did he yell? Threaten you? He hasn’t pulled out a gun? He hasn’t said one word to you? He has not threatened you in any way – verbally or physically? No knives? He’s not swearing at you or using profanity or anything like that, is he?”

McMichael answered no to each question.

‘A public lynching’ of the white accused

Last Friday, Gough argued for a mistrial because he believed court proceedings were being influenced by outside activists and media coverage, or what he called “mob violence by the left woke mob”.

In hugely inflammatory language, the defense attorney criticized the media and public figures, including civil rights activists such as Jesse Jackson who gathered around and inside the courthouse.

“[Just because] they haven’t put a podium up outside with a hangman’s noose on it doesn’t mean this isn’t a trial, despite the best efforts of the court,” he added.