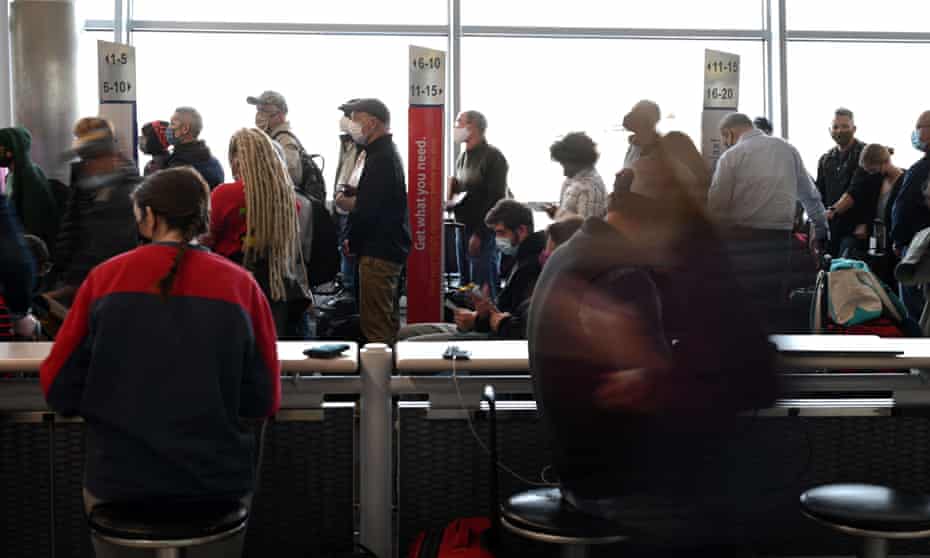 Maliha Aziz was understandably nervous about her 19 November trip from St Louis, Missouri, to her native city of Karachi, Pakistan, for her nephew’s wedding.

Aziz, a former principal of an Islamic Sunday school in St Louis, and her husband traveled to three weddings over the summer and experienced numerous flights delays and cancelations.

On a Friday in June, they were stuck at a gate at the St Louis airport for more than two hours and missed a rehearsal dinner in Omaha. Then while at the wedding, Aziz received a text informing her that the airline had canceled their return flight and rebooked them for a flight more than 24 hours later.

Aziz’s summer travel experience and worries about Thanksgiving – she is flying back to the US on 28 November – are not unique among the tens of millions of people hoping to see friends and family for the annual holiday.

That’s because while people are expected to again travel at levels similar to a pre-pandemic Thanksgiving, airlines are still contending with staffing shortages, which could lead to additional flight cancelations.

“It doesn’t really matter if a travel disruption is coming from a lack of staffing or shortage of routes or weather, it’s still something that is very frustrating for customers,” said Lindsey Roeschke, travel and hospitality analyst for the Morning Consult, a market research firm.

In spite of the Covid-19 pandemic, Thanksgiving flight bookings in the United States are up 78% from 2020 and 3.2% from 2019, according to a Adobe Digital Economy Index report published earlier this month.

“When it is busy, it’s very possible that [flights] will be over capacity – and that means the possibility of things going wrong is very high,” said Narendra Khatri, principal of Insubuy, a travel insurance company.

Over the Halloween weekend, American Airlines canceled more than 2,000 flights because of weather and staffing issues. In letters to employees, David Seymour, chief operating officer of the airline, described the weekend as a “brief irregular ops period” and said that “on the schedule front, we’ve ensured that November and December are built to meet customer demand and that they are fully supportable by our staffing”.

Both airlines have since offered staff increased pay to work over Thanksgiving, Christmas and New Year’s.

A union representing American Airlines flight attendants accepted an offer for 150% pay to fly during peak holiday periods and an additional 150% pay for attendants who do not call in sick between 15 November and 2 January.

But a union representing American Airlines pilots rejected an offer for 50% additional pay on peak travel days during the holiday season because of the pilots’ frustrations with the airline’s scheduling system, among other issues.

When weather forces a cancelation, the airline has struggled to fix the schedule, which has spiraled into further cancelations, said Dennis Tajer, a spokesperson for Allied Pilots Association, the union for the airlines’ pilots.

The union would like to see the airline allow pilots more flexibility to swap flights so that when a pilot’s flight from St Louis to Dallas is canceled, a pilot already in Texas can pick up that pilot’s next flight from Dallas. That often can’t happen because of issues in the information technology system and limits on how much a pilot can fly each month, Tajer said.

An American Airlines spokesperson declined a request for an interview.

“This recovery has just really pulled back the covers on the infrastructure problems at American Airlines,” said Tajer, who is also a pilot. “We know where the solutions are – they probably have solutions – but they are not even willing to talk about them.”

In spite of the uncertainty, not all analysts predict that Thanksgiving will be a mess.

In the wake of the Halloween weekend cancelations, Seymour reassured staff that almost 1,800 flight attendants had returned from a leave of absence and that the airline would hire 600 new flight attendants by the end of December.

Mike Malik, chief marketing officer at Cirium, an aviation data firm, attributes the airlines’ October meltdowns to the fact that some companies “wound down too fast” when air traffic slowed. As people have again begun traveling, they are still working through issues in trying to meet that demand, he said.

“The hits that have been taken in the last month or so, the airlines have adjusted for that, and I think they are very much geared up for Thanksgiving,” said Malik.

Ajay Jain, a 23-year-old software engineer, also has confidence in American Airlines despite the recent issues. He follows the industry closely through social media and websites such as the Points Guy and has seven flights booked with the airline before the end of the year, with the goal of achieving Gold status for 2022, meaning he would receive free upgrades.

He has flown about 30 times since he started traveling again after being fully vaccinated against Covid-19 and has not had any flights canceled. But in May, he missed an American Airlines flight from Austin to Dallas when an airline reservation system operated by Sabre, a technology company, went down.

Jain was able to catch a flight an hour later, but other passengers’ plans were more disrupted. Jain said he explained to some what had happened, that it wasn’t American Airlines’ fault, and they calmed down.

That hasn’t always been the case during the pandemic – and the hectic holiday scene at airports could prove especially volatile. Passengers have yelled at and assaulted flight attendants when asked to put their mask on. Others have spent hours on the phone trying to rebook cancelled flights.

In the end Aziz, the former Sunday school principal, and her husband made it to Karachi without any issues. They were looking forward to the wedding, even though it would only have about 200 people – as compared to more than 700 for her Pakistani family’s weddings in non-Covid times. Before their return flight 28 November, they must figure out where to get a Covid test, as is required for passengers traveling entering the US.

“Praying we won’t miss our flight from Chicago to [St Louis],” Aziz texted from Pakistan.